10 reasons why to eat Lupines – Truefoodsblog

10 reasons why to eat Lupines

Lupines became more and more a thing in our kitchen. Actually i do not remember when this actually started – I guess it was the moment when I had some lupine flour from my mom (from one of her bread experiments) and Moritz came back home from germany with some more information about the positive effects of lupines on his body.

That was also when we started researching for some more information about the little yellow beans that most of the people recognize from a trip to portugal. We found this really scientific and diverse research of the US National Libary of Medice with the titel :” the future of lupin as a protein crop in Europe” which I found very interesting, so i kind of decoded it for you including my own research into these 10 points.

Below the beautiful flowers are lupines in Switzerland. The seeds Lupines grow in shades of blues, deep pinks, purple, yellow and white. The plant belongs to the families of peas and are edible. 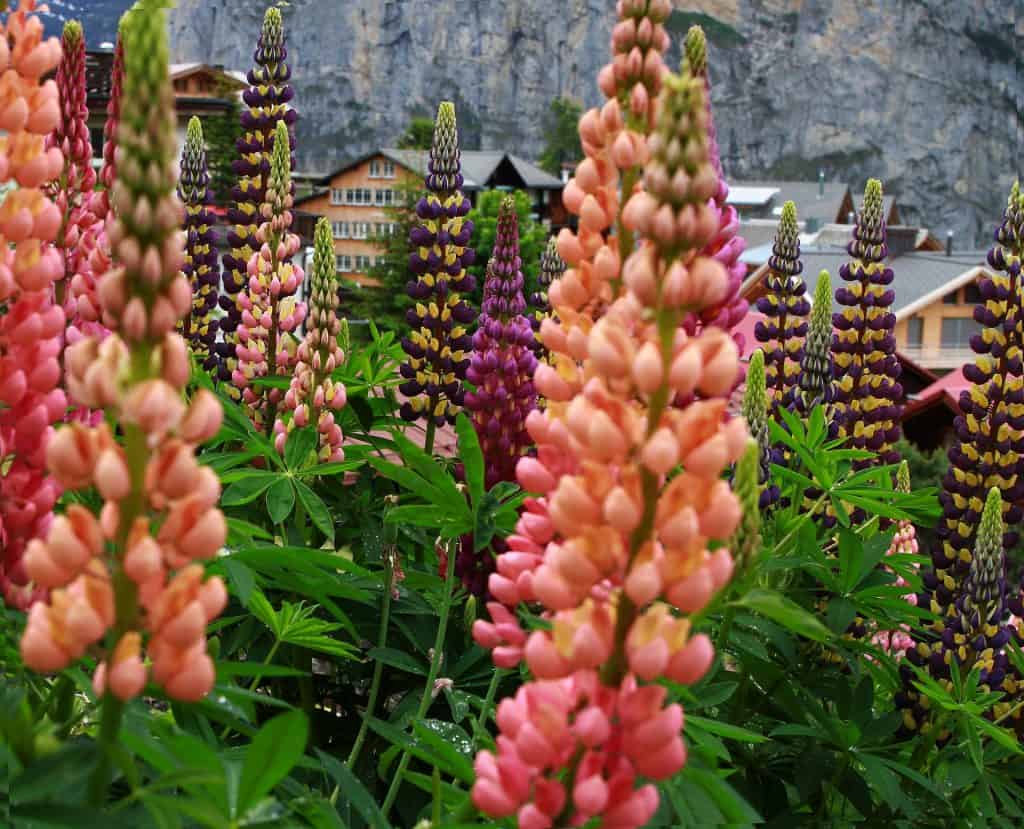 10 reasons why to eat lupines – Truefoodsblog

So Here are 10 reasons why you should also start eating lupines:

1. Its the perfect source of plant based protein:

with 26g of protein on 100g it is the ideal source of plant based protein, whereas it scores a pretty high rating in amino acid completeness. This is not only intersing for vegans and people who seek to have diverse sources of protein but also for people who are dependend on the consumption of gluten-free products: Gluten-free products are often lower in protein than standard goods, and lupin-based goods (bakery products, pasta, breakfast cereals) would restore or even increase the protein content (ncbi, 2017).

2. Its an ancient European crop – suitable for local production:

Lupins are relatively more tolerant to several abiotic stresses than other legumes, and have a proven potential for the recovery of poor and contaminated soils (Fernández-Pascual et al., 2007; Coba de la Peña and Pueyo, 2012). This could especially be profitable for damaged and exploided soils all over Europe. Identifying germplasm which is more resistan to especially colder areas , so enlarging the variety in the crop.

3.It is beneficial for diabetics:

To use lupin as a source of high quality and healthy proteins for food, several quality traits are worth extra attention: in particular, alkaloid content, which must be maintained as low as possible, and the conglutin-γ protein fraction, which is of interest to control insulin resistance and diabetes (Terruzzi et al., 2011).

4. Its an equivalent to soy

Soya bean has become the prevalent source of plant proteins for food and feed, and Europe depends on soya bean imports for 70% of its plant protein requirements. White lupin (Lupinus albus L.), yellow lupin (L. luteus L.) and narrow-leafed lupin (L. angustifolius L.), are native European legumes that represent a significant alternative to soya bean. Yet laws and regulations are still favouring the impor of soy beans, especially for animal feed. These soy beans are often GMO with questionable results for human and animal. The production of local lupines and enlarging the variety of animal feed would reduce these risks as well as the dependency on foreign soy. It would also increase the economic sustainability of the crop by making it dual-purpose for protein and oil, like soya bean.

5. It has a lot of minerals and vitamines

its includes: Folate, which helps your cells metabolize proteins and also controls gene activity. Manganese and Zinc, which promote immune function, and they also aid in reproductive health and regulation of gene activity as well as neutralises free radicals, preventing cellular damage, and also supports healthy bone and cartilage growth. Followed by copper- The copper abundant in lupines helps your body process iron, aids in the function of your spinal cord and brain, and strengthens your blood vessels (Livestrong, 2017).

Most of the people might know lupines from Portugal. If you ever went on a vacation to this sunny western European country you might have been offered the little yellow beens pickeled in salt water. The salty but slightly nutty sweet taste to it, as well as the process of pealing it out of its shell just makes you eat the whole damn buget in one. It gives everthing this unique nutty flavour, especially if you bake with it.

7. You can be creative with it:

There are s many cool things to cook with lupines ! of course the nicest way of eating them is with friends, sitting on the ocean and spitting the shells into the waves but of course there are uncountable options to include lupines into your diet !

You can make hummus, any baked stuff, breakfast, oatmeal or even Bolognese with them. We will provide you with all the necessary recipes of course 😉

8. It helps with inflammation:

Another interesting aspect of lupine protein functionality is its possible effects on inflammatory processes and changes in the gut microbiome, which has a significant influence on several physiological parameters, including metabolism, nutrient absorption and immune function (Walsh et al., 2014).

Lupine comes in many forms and it is more and more available in several well organized organic supermarkets and even bigger conventional supermarkets as well as online.

10. It helps with diversification:

As we already mentioned above it is one of the most convenient plants to replace or compliment the production of soy beans. As we all know monocultures and excessive use of soil of just one plant as well as excessive consumption of food products containing mainly the same ingredient’s is never a good thing. We are not promoting to start switching to an excessive consumption of one good, in this case Lupine. It is often sad to see how a superfood is discovered and its flushing through the supermarket shelves, this is not what this message is about – lupine revealed to have several positive influences on the European agriculture as well as on health and we think it is worth to implement it in a diverse and colourful diet

To establish lupin-based products as serious alternatives, the supply chain of these products must be assessed in terms of production costs, yields and quality, as well as factors influencing the acceptance of lupin-based products by European consumers (de Visser et al., 2014). The complete supply chain has to be addressed, analyzing the factors contributing to low lupin production by European farmers, and the conditions necessary to increase supply and make lupin a viable alternative to existing crops. The potential benefits of lupins at the farm level include N fixation with positive direct and indirect effects for subsequent crop yields, lower phosphorus requirements, reduced soil loss, and biodiversity benefits (Nemecek et al., 2008).

10 reasons why to eat Lupines- Truefoodsblog

and come on: another reason is definatly the beauty of the flowers !